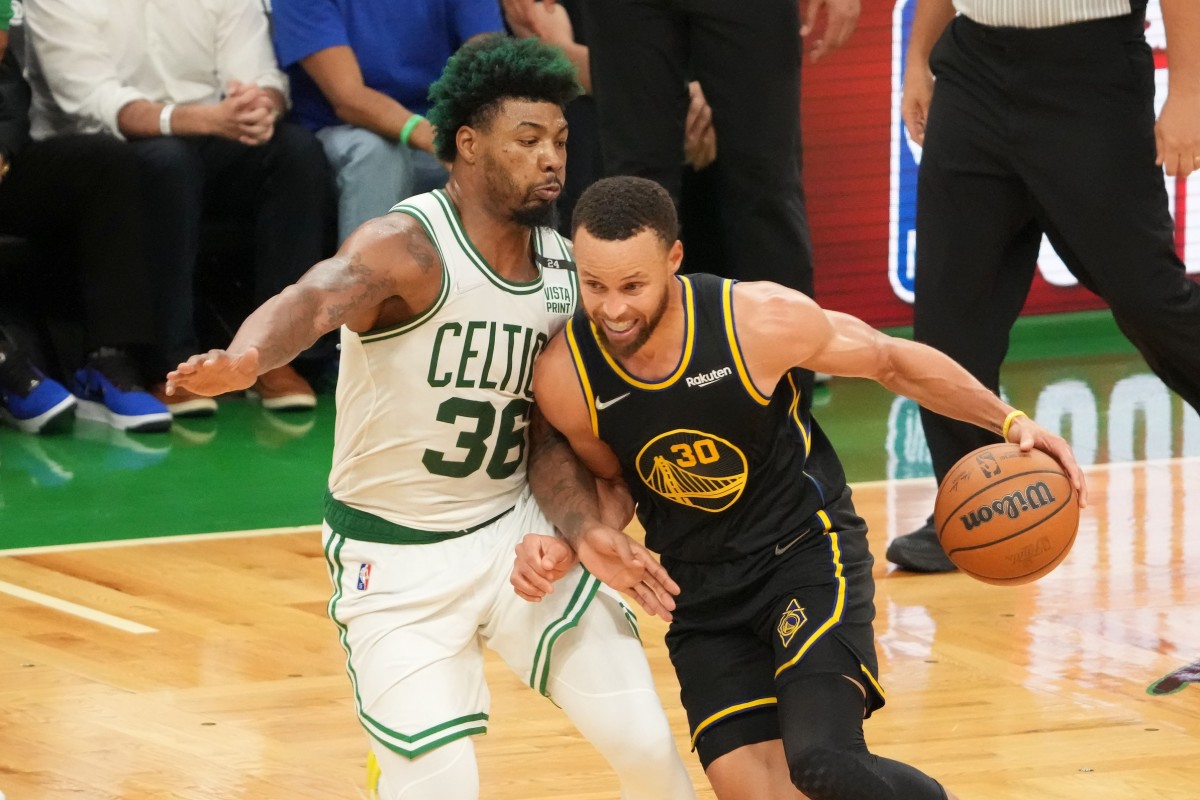 Now just two wins away from basketball immortality, the Boston Celtics are in the driver’s seat in the 2022 NBA Finals. Defeating the Golden State Warriors 116-100 on Wednesday night in Game 3, Boston made all the right adjustments coming off of a 19-point loss in Game 2.

Getting out to quick starts in the first quarter has been a recurring theme for the Celtics in this series, as they began the game on a 24-9 run and taking a 33-22 lead at the end of the first quarter. Boston’s offense was firing on all cylinders out of the gates, as they were not only hitting shots from the perimeter, but attacking the Warriors’ defense on the interior as well.

Golden State continued to fight in the second quarter, but the Celtics continued to hit tough shots and get good, high-percentage looks in the paint, resulting in Boston taking a 68-56 lead into halftime.

The third quarter of this series has belonged to the Warriors and in Game 3, they once again began the second-half hot. Golden State slowly began chipping away as Boston’s lead until they went on 12-0 run and actually took a one-point lead.

With Steph Curry checking out of the game with just under three minutes to go in the third quarter, Boston was able to stop the bleeding a little bit and were able to hold a four-point lead heading into the final quarter of play.

The Celtics now own a 2-1 lead in this series and with them hosting Game 4 on Friday, Boston has a chance to take a 3-1 series lead and put the Warriors on the brink of elimination.

Between the Celtics’ “Big 3” stepping up and the Warriors’ really struggling to defend in Game 3, so much happened in the third game of this series. Let’s take a look at some of the key takeaways from this game and how the series could play out given what happened in Boston’s win on Wednesday night.

Looking at Game 3 as a whole, the biggest thing that stands out is the fact that the Celtics played harder and were more motivated on either end of the court. They always looked one step ahead of the Warriors and most importantly, they played more physically than the Warriors.

This led to them holding things down on defense late in the game, as well as getting to the paint and scoring, something that they found a lot of success with all night long.

The Celtics outscored the Warriors 52-26 in the paint, they outrebounded them 47-31 and it seemed like every time there was a 50-50 ball to be had, Boston ended up with it.

Offensive rebounds, loose balls, jump balls… you name it, the Celtics took advantage of their opportunities and came away with points on the offensive-end of the floor as a result.

Compared to Game 2 where Boston looked flat at times and emotionally drained, they played with a lot of fire in Game 3, ultimately leading to them being able to start the game hot and sustain success for the vast majority of the game.

Even in the third quarter when they got outscored 33-25, the Celtics still fought hard and made up for their lack of scoring at times by stepping up the intensity on the defensive-end of the floor.

Perhaps the biggest adjustment they made that directly led to their victory was the fact that Boston really took advantage of some one-on-one opportunities they created with Marcus Smart, Jayson Tatum and Jaylen Brown.

No matter who was on these guys, the Celtics would spread the Warriors’ defense out and look to attack the basket from 35 to 40-feet out sometimes with a full head of steam, simply outmuscling Golden State when they would get inside the paint.

These straight line dribble drives sets by the Celtics were constantly run with success and heading into Game 4, they should and will likely look to do much of the same on offense given that they have a size advantage over Golden State on the interior.

In every single game of this NBA Finals series so far, the Golden State Warriors have had to play from behind in the first-half. When they have held leads, the Warriors have had trouble holding them and this has directly affected their ability to close out games in the fourth quarter.

So far in this series, Boston is outscoring Golden State by 38 points in the fourth quarter and this is not coincidence. The Warriors look absolutely gassed late in these games and for the Celtics, they take advantage of this since they have an overall more athletic team than the Warriors.

Being down at halftime, the Warriors have had to put a ton of effort into coming back in the third quarter of games and going on their miraculous third quarter runs we are used to seeing from this team.

While this has worked against other teams this year and in the postseason, the Celtics are not like other teams they have run into simply because of the way Boston plays and uses their athleticism on the offensive-end of the floor. Not to mention, their size has really impacted this series through three games.

Taking early leads and putting the pressure on the Celtics puts the Warriors in a position of power where they can now play to their strengths, especially on the defensive-end of the floor.

With Boston dictating the pace of play, especially on offense, the Warriors’ defense has been highly suspect at times and that was very apparent in Game 3.

How the Warriors start Game 4 on Friday will be very telling as to if they can spring an upset on the road to even the series yet again.

Marcus Smart Is The Key To A Championship For Boston

The Boston Celtics shocked everyone in Game 1 on the road not only because of their heroic shooting from the perimeter in the fourth quarter, but because Marcus Smart had a major impact on the game, finishing with 18 points, 5 rebounds, 4 assists and 2 steals.

In Game 2, Smart finished with just 2 points on 1-6 shooting and really did not make an impact whatsoever. On Wednesday night in Game 3, Smart went back to what was working in Game 1 of this series, as he might have been the most impactful player in this game.

Finishing with 24 points, 7 rebounds and 5 assists, Marcus Smart made his presence felt on the offensive-end of the floor, especially with his ability to attack the Warriors on the interior.

Five of his eight made shots came inside the paint and right at the rim, leading the Celtics’ offense to be tremendously better than that of the Warriors’ in this game.

Every 50-50 ball, Smart always seemed to be involved with the play and with Jayson Tatum and Jaylen Brown also knocking down shots and getting to the rim with chances to score, so much added pressure was put on the Warriors defensively given that Smart was a factor on offense.

Moving forward in this series, it is very clear to see that Marcus Smart is the key for the Celtics.

Tatum and Brown can score a combined 50-60 points, but if the Celtics do not get the secondary production they need, then they will not be able to close out this series, especially if Stephen Curry and Klay Thompson continue to shoot the ball like they did in Game 3.

Marcus Smart needs to be this third guy for the Boston Celtics and if they wind up winning the NBA Finals this year, it will be because of Smart’s two-way play.

All the Contestants Who Left in Week One