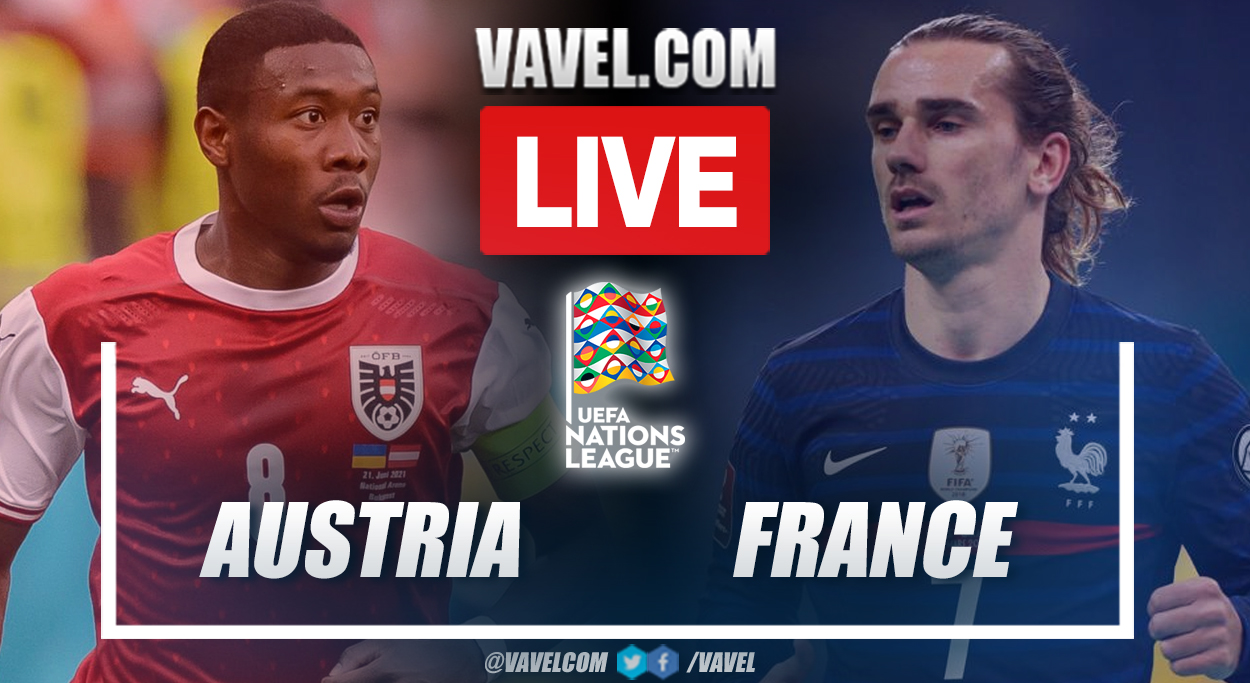 We thank you for your attention during the transmission of this event and invite you to stay connected with VAVEL.com.

END OF THE MATCH

Austria and France played to a one-goal draw

Kylian Mbappé received a ball from Nkunku, finished off and tied the game

Sabitzer blocks a shot by Mbappé

Erratic shot by Coman for France

Griezmann takes a free kick for France, which goes wide

After halftime, the second half of the game begins.

END OF THE FIRST HALF

The referee adds one more minute

Attempt by Karim Benzema, but misses the target

Lainer’s shot for Austria is saved by the French goalkeeper.

The ball is rolling and the match between Austria and France is already underway.

The stadium is ready

The last meeting between the two teams took place in the qualifiers for the 2010 World Cup in South Africa. On that occasion, France defeated Austria 3-1.

Austria is in the house

France arrives at the stadium

Who will be the referee and his assistants?

19°
Cloudy night
The field is dry

In less than an hour, the game between Austria vs France, corresponding to UEFA Nations League Group A matchday 3, will kick off.

In a few moments we will share with you the starting lineups for the Austria vs France live match, as well as the latest information from the stadium. Don’t miss a single detail of the live match updates and commentary from VAVEL’s coverage.

How to watch Austria vs France Live Stream on TV and Online?

What time is the UEFA Nations League match Austria vs France?

In France, the presence of Karim Benzema stands out. The 34-year-old player is going through the best moment of his career. Apart from being able to play again with his national team, he is being the main face of Real Madrid, being fundamental in the season, scoring approximately 50 goals, a situation that profiles him as the next winner of the golden ball. In the national team his numbers are also barbaric: 37 goals in 95 games.

Undoubtedly, the cornerstone of this Austrian team is Marcel Sabitzer. The Bayern Munich player has not enjoyed his best season at club level with the Bavarian side, but against Croatia he put on an exhibition in the middle of the field and managed to score the last goal of the game.

In total, the two teams have played 23 games, of which France has won 12, Austria has won nine and Austria has drawn two.

France is third in Group A of League 1 in the UEFA Nations League. The world champion must prove what it is and that is why it needs to score points. They are expected to lead the group and qualify first.

Austria comes into this match after losing to Denmark in the first UEFA Nations League Group A matchday 1. The Austrian team needs to win points to hope to qualify for the next stage.

The match will be played at theErnst Happel Stadium

The Ernst Happel Stadium, until 1992 when it was renamed in honor of former footballer and coach Ernst Happel, is the largest stadium in Austria with a capacity of 53,000 spectators. It was built from 1929 to 1931 and designed by the German architect Otto Ernst Schweizer, being inaugurated on July 11, 1931 for the second Workers’ Olympics.

My name is Esteban Monsalve and I will be your host for this match. We will bring you pre-match analysis, score updates and live news here on VAVEL.

‘Beavis and Butt-Head Do the Universe’ review: Mike Judge launches the dimwit duo into the 21st century

Who is Cassidy Hutchinson, the Meadows aide who testified before Congress?