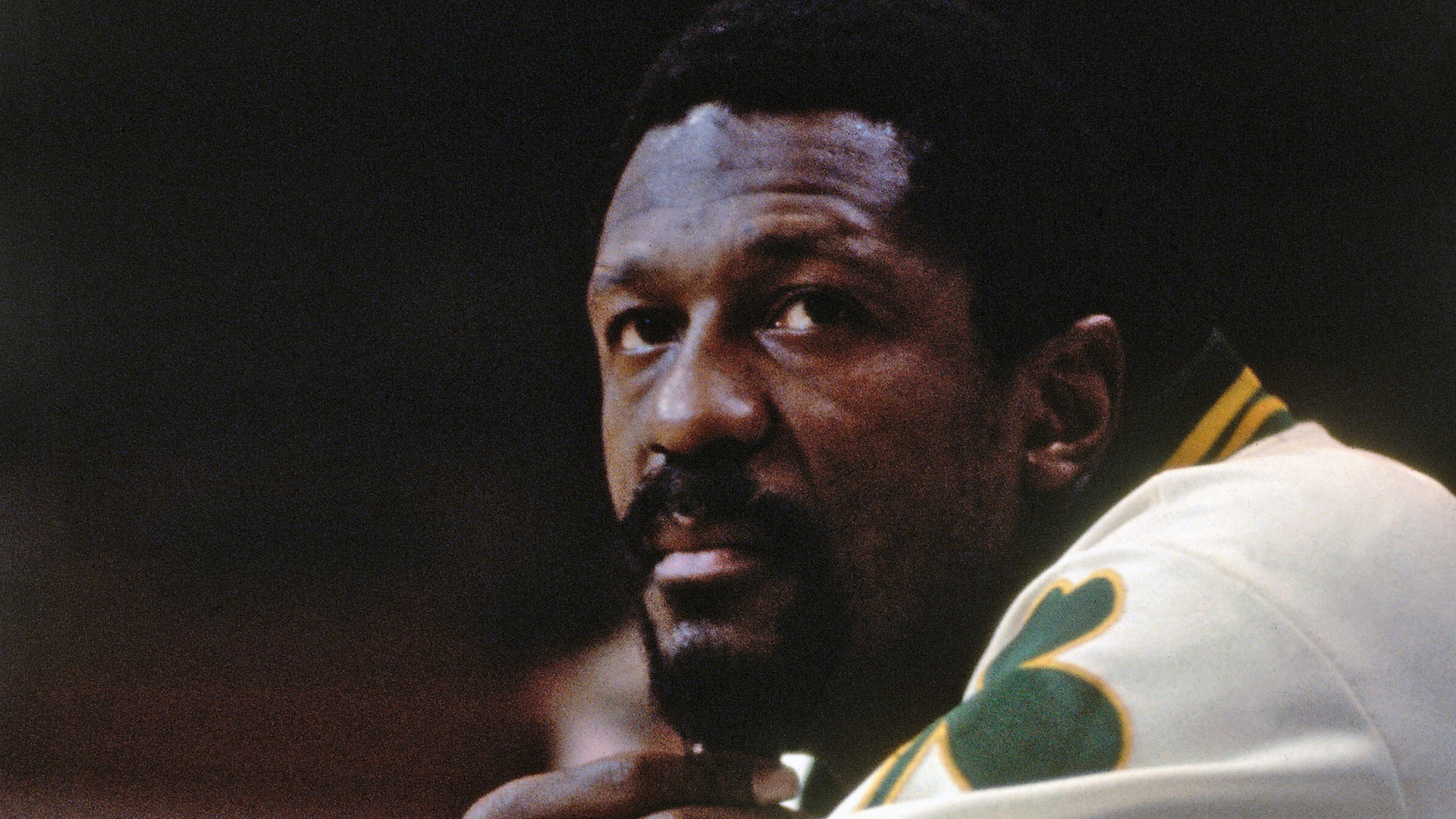 Bill Russell was an 11-time NBA champion whose impact went far beyond the basketball court as he fought for civil rights and social justice.

Bill Russell, the NBA great who anchored a Boston Celtics dynasty that won 11 championships in 13 years — the last two as the first Black head coach in any major U.S. sport — and marched for civil rights with Martin Luther King Jr., died Sunday. He was 88.

NBA Commissioner Adam Silver said in a statement that Russell was “the greatest champion in all of team sports.”

Current and past NBA players as well as others in and around the game shared their thoughts on his death.

A statement from Hornets Chairman Michael Jordan on the passing of NBA legend Bill Russell. pic.twitter.com/RdYcnuCrmb

My thoughts about Bill Russell passing away…. I am working on an deeper thought provoking article tonight as I process what just happened. pic.twitter.com/M69pXNkaC0

Charles Barkley’s statement regarding the passing of Bill Russell pic.twitter.com/kVwqnBchzO

Thank you for paving the way. You will be missed legend. @RealBillRussell pic.twitter.com/obvwkMDCCc

Today, we lost a giant.

As tall as Bill Russell stood, his legacy rises far higher—both as a player and as a person.

“I was drafted by Bill Russell. My first NBA coach was Bill Russell.”@TheJetOnTNT reflects on his relationship with the NBA Legend pic.twitter.com/DwMF6InCer

A champion who revolutionized the game for all of us. Bill Russell was an inspiration to me in so many ways. May he Rest in Power.

Thank you for everything! R.I.P Legend 🙏🏽 pic.twitter.com/tn2iGsArav

I’ll never forget this day we was like kids sitting around a camp fire listening to your stories pic.twitter.com/ZX3DDPRAwt

Rest in peace to an absolute LEGEND https://t.co/QwSHnWZraP

So very sad to hear about Bill Russell today. He set the standard – on and off the court. RIP to an all-time winner, teammate and person. 🙏🙏 https://t.co/OIzUn8aLwG

RIP to the Legend Bill Russell

I’m heartbroken to hear about the passing of the greatest winner the game of basketball has ever seen, a legend, hall of famer, mentor and my friend for over 30 years, Bill Russell. 💔 pic.twitter.com/iiSkVq2kdn

Bill Russell was my idol. I looked up to him on the court and off. His success on the court was undeniable; he was dominate and great, winning 11 NBA championships. Off the court, Bill Russell paved the way for guys like me. pic.twitter.com/ZMIrEx8Tne

He was one of the first athletes on the front line fighting for social justice, equity, equality, and civil rights. That’s why I admired and loved him so much. Over the course of our friendship, he always reminded me about making things better in the Black community. pic.twitter.com/K73adpaWZ4

Bill Russell was the most powerful ambassador of the NBA. I held him in the highest regard and tried to build on the groundwork laid by him and his generation of players. Thank you, Bill, for leading the way and giving us such a high bar to shoot at.

Rest in peace Bill Russell you were everything we all aspired to be, your winning spirit will live forever my friend. Thank you for your words of wisdom. pic.twitter.com/rBjFS6nhzW

Unapologetically himself at all times!! The ultimate leader and just happened to be one of the best hoopers ever! RIP Mr Russell, you will be dearly missed 🙏🏾🕊 pic.twitter.com/30xXhoGXsj

Was an absolute honor to spend time with #BillRussell. He was a walking encyclopedia. I remember him quoting once – “Basketball is what I do for a living, but it’s not necessarily who I am.” His legacy will NEVER be forgotten! pic.twitter.com/5jBrMuxDn8

Steve Kerr on the life and legacy of Bill Russell. pic.twitter.com/5nT5kiFI3r

“The influence he had on those he was so close with is impressive, but the impact he had on so many people everywhere is legendary.” pic.twitter.com/U5aFPlsLdj

Thank you for paving the way @RealBillRussell 🙏🏾#Legends never die 🕊

So sad to lose a friend broadcasting partner and one of the greatest players in the history of the NBA. RIP Bill Russell @ESPNNBA @NBA @NBAonTNT @NBAOfficial @NBATV @celtics @NBAcom @NBAalumni @TheNBPA

Bill was my idol growing up, to meet & work with him in 1986 for the Goodwill Games, was a thrill!That was the start of a 34 yr friendship. We were Inducted into the FIBA HOF together, & I loved listening to his stories. My heart goes out to his wife Jeannine. PEACE my friend- pic.twitter.com/JTfaepMZWR

I’m thinking these two met up already today and are having an epic reunion. pic.twitter.com/QKjeDRVJbL

Rest well, Bill Russell: one of the greatest on the court, a humanitarian, and a gracious human. My condolences and prayers to his family. pic.twitter.com/v2aHm5x4yt

One of the most dominant players in @NBA History. An 11 times NBA Champion and one of the best to have ever done it.

I’ll forever be honored to have met you. Thank you for everything you have given to the game and all of us. Rest in peace, @RealBillRussell. 🙏🏼 pic.twitter.com/HOouLIrXWv

You continually served as an inspiration on and off the court, leaving an impact on the game as well as the community.

The NBA family just learned this afternoon that Bill Russell, the 11-time champion and Hall of Fame icon of the Boston Celtics, who used that fame to further the civil rights cause in the United States during the turbulent 1960s, has died at the age of 88. He will be missed💔💔💔 pic.twitter.com/DA4R70Wjps

RIP to the Legend Bill Russell

Bill Russell was a treasure as a player, coach and especially as a human being. @Lakers and @celtics fans can agree on this today. 😔💜💚😔 https://t.co/TTDfp9w8Zq

Rest Easy Bill🤎🙏🏾 🐐A lifetime of fighting, standing and winning✊🏾 but most of all caring for our community &ppl‼️ My Deepest condolences to his wife, family, friends and our whole basketball community🙏🏾 I’ll forever remember your smile, laugh&bigger than life personality❤️🕊 https://t.co/nATzFIWOOr

A true legend on and off the court. RIP Bill Russell 🕊

The Great Bill Russell has always been my basketball idol.
Not because he won 11 NBA championships and 5 MVPs.
It was mainly for his stand for civil rights and social justice.
We have lost a great one.
I can remember my first time meeting him and being like a nervous (1/1)

This is a teary-eyed Sunday knowing that we lost a legendary human being @RealBillRussell His dedication to civil-rights, human-rights and the sport of basketball puts him beyond legendary status. That smile will be missed. pic.twitter.com/fmZSmFVkqp

RIP Bill Russell. A legend in every sense of the word, on and off the floor🙏🏽

12 time @NBA All-Star
11 NBA rings
5 MVPs
No 3-point line
No social media
Just played and dominated in a day and a league that was def not soft. @celtics to the core ☘️
RIP @RealBillRussell 😢 #LEGENDARY pic.twitter.com/mG7K1AOfQq

You are loved, appreciated, honored,true pioneer , the greatest overall for all you stood for. Stood against and the doors that now fly open for us is a result of your Journey. May God Bless your family. And may the angels rejoice!!! thank you Legend

RIP To the OG GOAT

Today we lost one of the true Pillars & Giants of our game. Rest In Paradise 🕊… #billrussell pic.twitter.com/WBE2VuuYct

Thank you for all you did for us and this game. Thank you for paving the way. Respect and Love always. Rest in Paradise. 🙏🏿🕊🐐. https://t.co/BglOLLohHI

RIP to the legend🙏🏽 https://t.co/K6DJBNCyBD

Rick Welts on the passing of Bill Russell pic.twitter.com/VftdgmSLTV

“This is one of my proudest moments in basketball, because I determined early in my career, the only important statistic in basketball is the final score.”

– Bill Russell at the ’09 All-Star Game in Phoenix after announced the NBA Finals MVP Award would be named in his honor pic.twitter.com/d4bNDEECRm