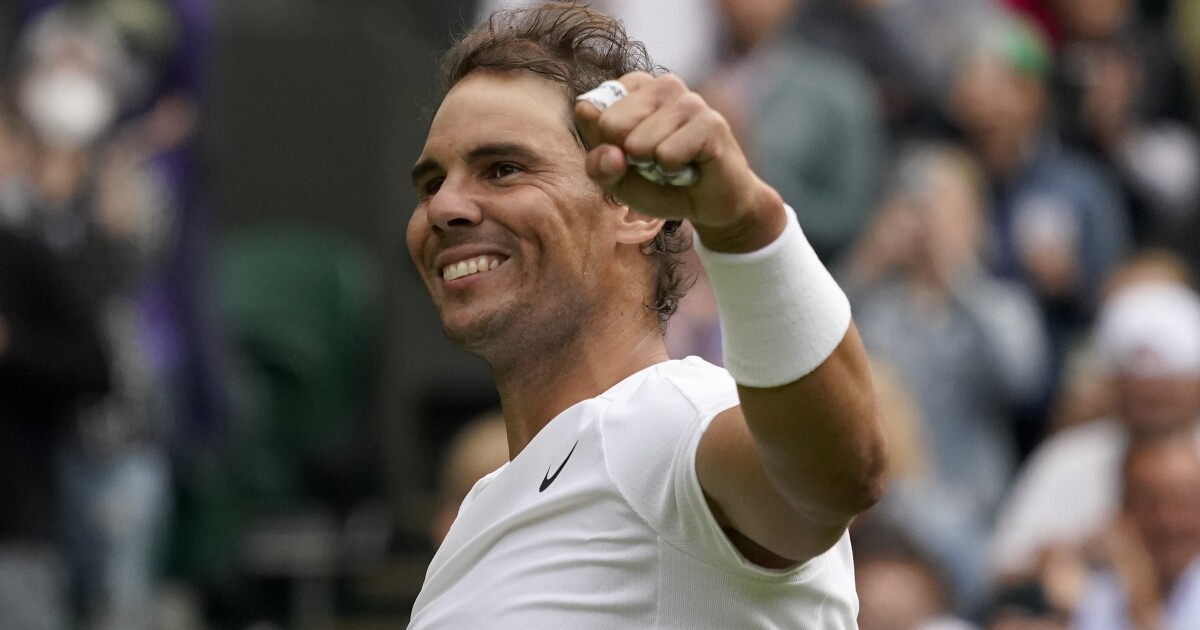 Rafael Nadal got his Wimbledon campaign off to a winning start, though he needed four sets to do it.

The Spaniard is attempting to win his third consecutive Grand Slam tournament to add to his men’s record 22 major titles.

It was Nadal’s first match since winning the French Open earlier this month. The three weeks off showed at times, as Nadal, who also won the Australian Open this year, amassed 41 unforced errors to go with 23 winners.

The 21-year-old Auger-Aliassime was a quarterfinalist last year for his best result at the All England Club.

Cressy came into Wimbledon in good form, having been runner-up to fellow American Taylor Fritz at the grass-court Eastbourne tournament last weekend.

The 11th-seeded Fritz also advanced Tuesday with a 6-4, 6-4, 6-3 victory over Lorenzo Musetti. Fritz had 16 aces while winning 84% of his first serves and converting four of eight break points to defeat the unseeded Italian.

Feliciano Lopez’s record-equaling Wimbledon appearance ended in the first round. The unseeded Spaniard lost to Botic van de Zandschulp of the Netherlands 6-2, 6-3, 6-3.

Lopez was playing in his 81st Grand Slam event, equaling Roger Federer’s all-time record for most Grand Slam men’s singles appearances. He had played in 79 in a row as of this year’s Australian Open, another record for men, but failed to qualify for the French Open to end that streak.

Two-time Wimbledon women’s champion Petra Kvitova advanced to the second round. The 25th-seeded Czech, who came into the tournament after winning the grass-court tune-up event at Eastbourne, beat Jasmine Paolini of Italy 2-6, 6-4, 6-2.

Kvitova won the title at the All England Club in 2011 and 2014. She was then attacked in her home in 2016 and suffered knife injuries to her playing left hand. She later had surgery and needed more than five months to recover.

American teenager Coco Gauff rebounded from a set down to beat Elena-Gabriela Ruse 2-6, 6-3, 7-5 in the first round.

The 18-year-old Gauff was the runner-up at the French Open but needed three sets to get past the 54th-ranked Romanian.

The 11th-seeded Gauff got the go-ahead break in the third set at 5-5 on her sixth break point of the game when Ruse double-faulted.

Matteo Berrettini, the 2021 Wimbledon runner-up, has pulled out of the grass-court Grand Slam tournament after testing positive for COVID-19.

What Is Eric Herschmann’s Panda Painting in Jan 6 Hearing?

Ezra Miller’s a Public Menace. Why Are They Still The Flash?