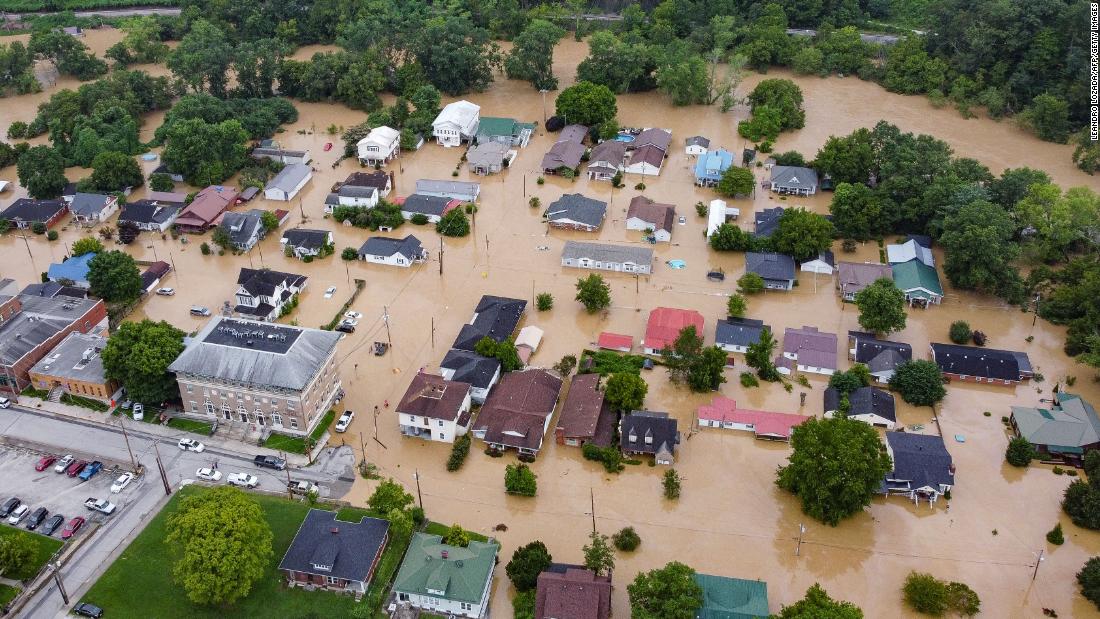 “It’s going to get a lot higher,” Beshear said at a news conference Friday morning, adding that an unknown number of people are missing.

“There’s going to be multiple families that we’ve lost,” Beshear told Brianna Keilar on CNN’s “New Day” earlier. “Kids that won’t get the opportunity to grow up and experience so much that we have.”

“This is so deadly, and it hit so hard, and it hit in the middle of the night,” the governor said, adding that although eastern Kentucky often floods, “we’ve never seen something like this.”

Rescuers are working around the clock to reach areas where flooding washed away roads or left them under water after heavy rain Wednesday night into Thursday.

“Whole roads washed out — we still can’t get to a lot of people. There is so much water. The current is so strong. It is not safe for some of the water rescues that we need to do,” Beshear said.

Swollen floodwaters washed out bridges, wiped out power and sent some residents scrambling to their rooftops as water gushed into their homes. Some families’ houses and cars were submerged or swept away completely by the flooding, which has been exacerbated by creeks and grounds already soaked from ongoing rainfall.

Houses were “completely swept away in the middle of the night,” possibly while residents were sleeping, Beshear said.

Hundreds of Kentuckians have lost everything they have, the governor said. Officials believe thousands have been affected, he said at the news conference.

There is no reliable number of people unaccounted for, Beshear said. Part of the problem is that “communication is still very difficult,” with cell service out in many areas.

“It’s going to be very challenging to get a good number,” the governor said.

The deaths were reported in four counties: 11 in Knott County, one in Perry, two in Letcher, and two in Clay County, Beshear said.

People around the city of Hazard, in the southeast county of Perry, are “so overwhelmed, we don’t really know what to ask for,” Mayor Donald “Happy” Mobelini told CNN Friday morning.

“In downtown Hazard, we don’t really have a ton of property damage here. But in the outlying areas, it’s devastating,” said Mobelini.

Some houses are flooded that have stood for 50 or even 75 years without water ever coming close to them, he said.

Seven of the city’s nine bridges are impassable, and “that’s unheard of,” the mayor said.

The town is bracing for news of more deaths, he said.

“Today will be the sad day,” Mobelini said. “It’s all sad. . . but this is the first time I remember that there’s been a loss of life, and at this point we don’t know what that looks like.”

The storm “totally annihilated” Perry County’s infrastructure, Sheriff Joe Engle told CNN. “Water, telephone, internet, electricity, all the basic roads, all the basic things you would build a community around have just disappeared,” he said.

“There is a big swath of the county that’s totally isolated, the state highways are just totally gone,” the sheriff said.

The first confirmed death in the county was that of his 82-year-old great aunt, Engle said.

Beshear warned that the destruction is not over as rain continued Friday. The governor had planned to take an aerial tour of Hazard, but bad weather prevented that.

“Just that weather should remind us: This isn’t over,” Beshear said.

“The water hasn’t crested in some areas, and won’t until tomorrow,” he said.

Eastern Kentucky has a slight to moderate risk of flash flooding through Friday evening as an additional 1 to 3 inches is possible throughout the day, according to the Weather Prediction Center.

And in the region of Jackson, Kentucky, downstream from the hardest-hit flood areas, “streams continue to rise due to excess runoff from earlier rainfall,” the National Weather Service office there said Friday.

An elderly man and woman died after being swept from their homes in the Oneida Community near Manchester, Kentucky, according to Clay County Coroner Jarrod Becknell. The man was 76 years old and the woman was in her late 60s or early 70s, Deputy Coroner Joe Crockett said.

It is not clear whether the two deaths are included in the statewide toll that Beshear announced.

On Thursday evening, Kentucky officials recommended that people evacuate the homes and businesses in the floodplain of Panbowl Lake in Jackson, citing the Kentucky River’s rising water level and a “muddy discharge” seen near the lake’s dam. A portion of Kentucky Route 15 was also closed Thursday night.

Much of West Virginia is in the moderate risk for flash flooding on Friday, according to the Weather Prediction Center. The southwest region of Virginia is also at risk of flooding Friday with between one and two inches of rain possible, and potentially more in some local areas, according to the National Weather Service in Blacksburg, Virginia.

President Joe Biden issued a major disaster declaration for Kentucky Friday after Beshear said he sent a direct request for federal assistance, and Deanne Criswell, the administrator for the Federal Emergency Management Agency, was on the ground there Friday.

“FEMA has brought in additional search and rescue teams to support the amazing efforts that are already ongoing on the ground,” Criswell said at the news conference.

As floodwaters rose to dangerous levels, some Kentuckians quickly became trapped and were unable to safely escape. Hundreds of boat rescues and 50 air rescues have been made, Beshear said Friday.

The National Guard from multiple states is assisting rescue efforts, he said.

“I’ve never seen this much water before,” Williams said. “I mean it just absolutely poured and we’ve got, you know, some small towns that are completely underwater.”

Widespread water and power outages in the region are hindering recovery efforts, Beshear said Thursday. He noted that the flooding is making it difficult for utility workers to access areas needed to restore power.

More that 23,000 customers were without power across the state as of early Friday, according to PowerOutage.us.

The state also has a limited number of helicopters that are capable of hoisting people into the air, the governor said. In an effort to assist the state’s recovery efforts, both West Virginia and Tennessee sent helicopters with hoisting abilities to Kentucky.

Communities also jumped into action to help their neighbors, including residents in the town of Whitesburg.

“We took kayaks, jet skis, boats, chainsaws and hatchets to every place that we could,” resident Zach Caudill told CNN. Caudill’s home only suffered from a few inches of flooding, but he said several of his neighbors lost their homes completely.

Caudill grabbed bandages, gauze, medicine, menstrual supplies, food, water, and blankets from his home to take to others, he said.

“Everyone was there trying to lend a hand and help. That’s how tight-knit our community is,” Caudill said. “When one of us hurts, we all hurt.”

Kentucky State Police are asking residents of at least eight counties to call them if they have missing family members and to provide information on their loved ones. The counties include Wolfe, Owsley, Breathitt, Knott, Leslie, Letcher, Pike and Perry.

Kentucky was one of several states, including Missouri and Arizona, that experienced severe flooding on Thursday amid increasingly extreme weather events that are amplified by the climate crisis.
In St. Louis, record-breaking rainfall at the beginning of the week triggered dangerous flash floods that have continued for days and left at least one person dead.

Rainfall over land has become more intense since the 1980s, according to the UN’s Intergovernmental Panel on Climate Change (IPCC). The report’s authors say human influence is the main driver.

Human-caused fossil fuel emissions have warmed the planet a little more than 1 degree Celsius, on average, with more intense warming over land areas. Scientists are increasingly confident in the role that the climate crisis plays in extreme weather, and have warned that these events will become more intense and more dangerous with every fraction of a degree of warming.