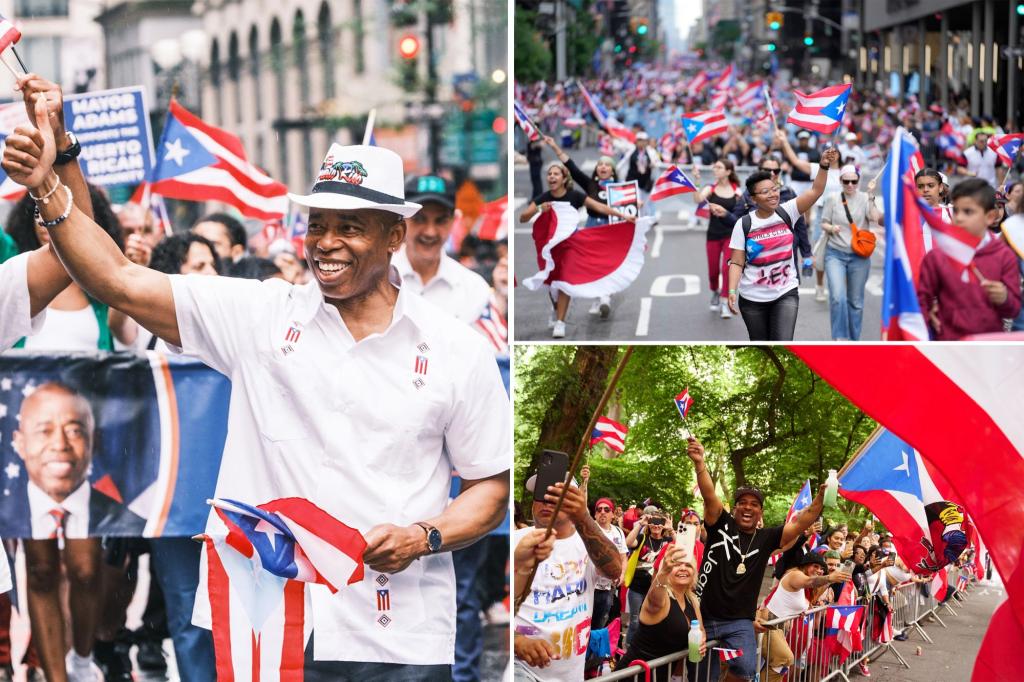 The city’s iconic Puerto Rican Day Parade returned to its full boisterous self Sunday after a two-year COVID hiatus, drawing a crowd of thousands including Mayor Eric Adams and other local pols.

A beaming Adams, flanked by city Department of Transportation Commissioner Ydanis Rodriguez, walked up the East Side of Manhattan waving a Puerto Rican flag while wearing a matching white shirt and hat with the ensign emblazoned on them.

Thousands of revelers decked out in Puerto Rican colors also braved the rainy weather to start at Fifth Avenue and 43rd Street about 11 a.m. and walk north to 79th Street.

US Secretary of Education Miguel Cardona, the son of Puerto Rican parents, served as the parade’s grand marshal.

Sunday’s parade was the first major celebration since 2019 of the 8 million Puerto Ricans living on the island and elsewhere, because the event, which has been held since April 1958, was significantly scaled down in 2020 and 2021 because of the coronavirus.

On Friday, Adam raised the Puerto Rican flag at Bowling Green Park in Downtown Manhattan to celebrate the return of the full-fledged in-person parade.

“This city says, ‘Mi casa, su casa. This is your city. This is our city,’” he said. “And we’re here together. And this is an important time. I’m looking forward to this weekend.

“It’s just a powerful moment that the Puerto Rican community has played a major role in building this city [on] so many levels.”

National Puerto Rican Day Parade Board Chair Louis Maldonado said in May, “This is a milestone year for the parade, and our return to Fifth Avenue is yet another sign that [the city] and the Puerto Rican community are strong, resilient and as vibrant as ever,”

Yarimar Bonilla, of the Center for Puerto Rican Studies at CUNY, told WNYC, “There’s so much healing that we need to do after this pandemic that has caused so much stress.

“We need these community events to celebrate ourselves and remind ourselves of who we are and what we can be when we come together.”

Biden’s Bike Crash Isn’t About Him. It’s About the Media – InsideSources

Skull and Bones character creation – does it have it?